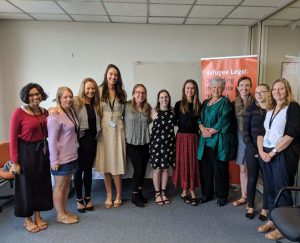 Today, we were honoured to have long-term refugee advocate, Pamela Curr AM, as guest speaker at our International Women’s Day breakfast.

Over the last 20 years, Pamela has fought tirelessly – and with extraordinary impact – for the rights of refugee and asylum seekers women. Has changed the course of so many vulnerable women’s lives for the better. It’s also inspired a generation of current and future women advocates.

Pamela spoke about the progress she has seen in the advancement of women’s rights, but also reminded us there is a long way to go for these changes to be experienced by all women, equally, including for refugee women.

Staff and volunteers were deeply moved by Pamela’s passionate speech. She recounted tales of harrowing abuse of female refugees and asylum seekers.

She also provided crucial historical context about the lives and the often horrific circumstances of the women living in offshore detention centres, as well as the growing number of women imprisoned in Australia on character grounds.

Pamela painted a picture of refugee women being sexually abused on Nauru, often falling pregnant, and, upon being brought to Australia for urgent medical treatment, unable to comprehend returning to such a traumatic and harrowing experience.

Referring to a landmark litigation case, led by Refugee Legal, which involved the horrific sexual assault of a refugee woman by a group of Nauru men, Pamela outlined the woman’s experience of being transferred to Australia for treatment and the intervention by Refugee Legal who mounted the first successful legal challenge to forced return to Nauru. This precedent has been used to prevent the forced return hundreds of women, men and children.

As a result, support has since been denied to more than 7500 people seeking asylum, leaving them hungry, homeless and destitute.

Speaking to a room of Refugee Legal staff and volunteers, Pamela highlighted the gains made by women in the West over the last 50 years.

“In Australia, we are now meeting women from countries where those gains have been slowest to come, and today is a good time for privileged women in the West to remember that not everyone has been as lucky, or as successful, in achieving the freedoms and rights that we have. Their struggle remains our struggle also in solidarity with sisters everywhere.”