This week, Senator Fraser Anning delivered a maiden speech that was abhorrent and fundamentally wrong. 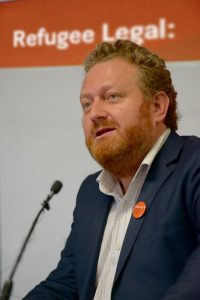 It has rightly been condemned across the public and political landscape of our nation.

In less than two minutes, Senator Anning proposed a ban on Muslim immigration, a return to what would be akin to the White Australia policy, argued that all terrorists are Muslims, and called for a “final solution to the immigration question”.

We, as an organisation, unequivocally condemn Senator’s Anning’s speech. His call for a Muslim immigration ban is extreme discrimination; it’s racism, and it represents a fundamental betrayal of our core values which include respect and inclusion of all – equally. It also denigrated and questioned the very place of many people within our society.

In aid of promoting such policies, he also enlisted a phrase – “final solution” – used by the Nazis for their genocidal horrors, and commonly used now in alt-right politics.

Senator Anning’s speech is not only deeply offensive and hurtful; it strikes at the very heart of our common decency and humanity. It is a callous, calculated disregard of the experience of millions, and a divisive proclamation designed to sow discord in our society.

The immediate political response has been heartening. Across the political spectrum, many stirring statements have been made by parliamentarians, side by side, condemning the sentiments in Senator Anning’s speech.

But as some commentators have rightly noted, this comes amid a disturbing increase in race politics in our country – whether it be focused on inciting fears of ‘African gangs’, seeking to introduce exclusionary citizenship criteria or favouritism for white South African farmers. That’s why the real question – the real moment of truth – is whether the apparent line drawn this week will be maintained and defended beyond.

For the past 30 years, central purposes of our work have been to promote non-discriminatory, fair and just immigration policies, and act on this through defending the rights of asylum seekers, refugees and vulnerable migrants. Those we help come from all corners of the globe with a rich diversity of backgrounds. What binds them is remarkable courage, resilience and a driving commitment to participate and contribute to the life of the community.

We are, as a people, so much richer, more vibrant, and ultimately stronger for it. In reality, it is central to who we are and who we will be. Not just in social and cultural terms, but also economically. In truth, it is a crucial part of the life and fabric of our nation.

This is why Anning’s words are so wrong. They not only paint an ignorantly pessimistic picture of how most Australians from diverse backgrounds actually interact – which is overwhelmingly positive; they pander to the ignorance and fear that continues to demonise, and fuel hate speech and the unconscionable policies targeting society’s most vulnerable people.

Ultimately, this is not just about the condemnation of these hateful and divisive statements. This is also about the kind of society we want to live in, dream of and defend. We must not be bystanders wherever or whenever this occurs. Not only must an invulnerable line be drawn, but we must together take a stand on the right side of this line – and the right side of history.