I’m writing to update you on the situation of people seeking asylum who have been brought back to Australia from Nauru and PNG. As you’ve no doubt heard, some of these people have been issued by the Government with a “Final Departure Bridging Visa E” and have also been stripped of basic income, housing and torture/trauma counselling supports. 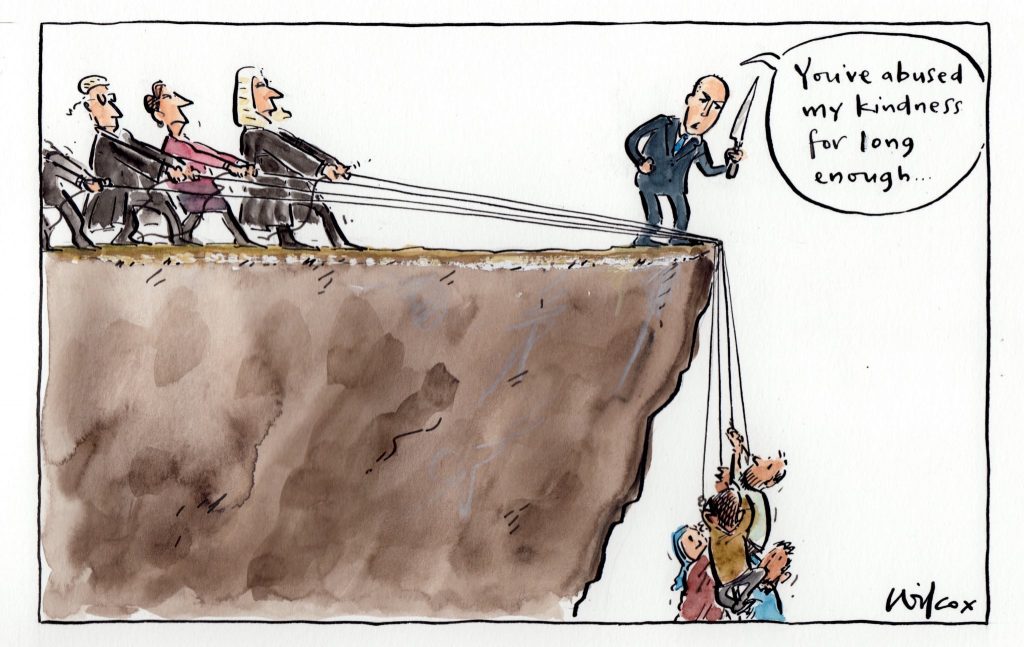 With thanks to Cathy Wilcox for permission to use this image

The then Australian Government recommenced forcibly exiling people to Nauru and PNG under the offshore processing regime in August 2012. Since then, around 400 have been brought back to Australia due to their serious medical – psychological and physical – and protection issues. They have been living in community detention across Australia.
Most are from Afghanistan, Syria, Sri Lanka, Iran, or are stateless. Many have been found to be refugees, while others are still having their refugee cases finalised. Most have filed High Court proceedings to prevent their return to Nauru or PNG, and are waiting for these cases to be resolved.  Many are seeking resettlement to the US under the recent Australia-US resettlement deal.

Without notice, up to 100 of these very vulnerable people were called in to the Department of Immigration and Border Protection this week to be told that they had been issued with a “Final Departure Bridging Visa E” for 6 months. They were also told that:

People will be allowed to work, have access to Medicare, and study only if under 18.

Why this is wrong

In our view, the policy intent of this sudden announcement is to coerce people into destitution so that they will return to danger. To cut essential supports for such vulnerable people is as unconscionable and dangerous as it is unnecessary. This move by the Government constitutes an act of conscious, calculated cruelty which is likely to cause further fear and trauma.

As a signatory to the UN Refugees Convention, Australian retains legal, moral and practical responsibility for the plight of these people. We are duty-bound to protect people fleeing from harm from being exposed to further harm. This includes ensuring that they are adequately supported and provided with enduring protection.

The overwhelming evidence is that neither Nauru nor PNG are safe places to return to; people’s health, well-being and, ultimately, their survival are at dire risk there.

One must ask: why does the Government see the need to inflict another wave of suffering on people who’ve already suffered so much?

What we are doing to help

At Refugee Legal, we continue to represent people in this group. They include women who were victims of sexual assault while on Nauru, for whom we have filed cases in the High Court.

We are also working closely with key partner agencies who provide frontline material aid and psycho-social support to ensure that people affected are properly supported.

What you can do to help

It is essential that our community take a stand by not only condemning this cruel move, but by stepping up to ensure that people get the support they need.

We can all do something to help. Here are five ways to make a real impact:

To me, in overcoming inhumanity, our greatest asset is our own humanity.
Yours sincerely,